A TEAM BUILDING FOR THE DIGITAL ERA!

A TEAM BUILDING FOR THE DIGITAL ERA!

Monte Carlo is the land of the Belle Époque as much as of innovation! In fact a new team building concept has been implemented, with the use of tablets, technology and… creativity!

Welcome Travel Team just organized an activity for a group of 360 persons during a corporate meeting. The team building was aimed at creating 4 different videos focused on the 4 key words and values of the client’s company.

The guests were split into 20 groups of 18 players, each group guided by personalized touchpads and accompanied by an English-speaking staff coach.

The participants showed their creativity and liveliness throughout the 3 hours of activity: they chose 4 different places as scenarios and realized 4 different sequences in a form of a video clip. During their journey our coach supervised each team, by providing them with local knowledge and – when needed – with buzz and energy.

WTT created before the event a 100% digital game interface, which will allowed the teams to interact on a pre-set map of Monaco, with suggested path for each team.

Each team organized the activity, defined the role of each participant and decided the places to reach to film their video clips. The interactive map allowed them to visualize the available places and to get any useful information. Once the places were chosen, the geo-localization suggested the fastest walkable route to get there.

All the videos taken by the clients were collected at the end of the game and edited by our staff.

The final video was broadcasted during the gala dinner that very evening: an unforgettable moment to create true links among colleagues and empower the company’s identity! 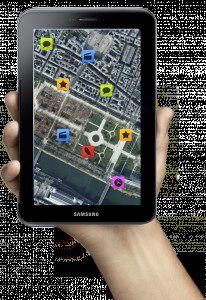